Glass conducts light more efficiently than any other material. This efficiency is why glass holds so much dynamic potential for sculpture; by constantly changing the sculpture with the passage of natural light throughout the day. And this is why we never have to lift a finger to help the installations look good most of the time. The sculptures naturally develop an opalescent luster in sunlight, sympathetically reflecting the colors that surround them.

But once the sun goes down, the enterprise is much more difficult. Instead of a wealth of diffuse light with a broad spectrum of color [sunlight], artificial light is emitted by a point source of a single color. The more recent “flexible” sculptures we’ve made express this monotone with each tube focusing the point source into a sharp ring and the collection of rings appearing as a linear highlight across their surface.

So when commissioned last year to do a dining room installation in Singapore, we figured the jig was up. The sculptures were the least spectacular at night and that was the time that most people would see it. We had been trying to finesse this problem for years and our attempts at a solution were both too straight-forward and wrong-minded. With an attendant sense of desperation, we kept trying to place the lights more deftly as if the solution were just out of reach and simply a matter of additional effort and insight. Exasperated and half-joking, we conjectured that the only way out was some sort of “lighting Jujutsu,” which emphasized the objectionable highlights rather than trying to obscure them. Of course, this turned out to be the solution. Admittedly this was not the consequence of an inspired evolution. It would be more fairly described as enlightenment by way of grasping at straws. 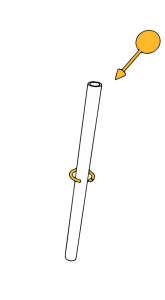 Assuming the band of linear highlights as a starting point, we concentrated on what produces this effect: a point of light becomes a radial line or ring perpendicular to the length of each tube. 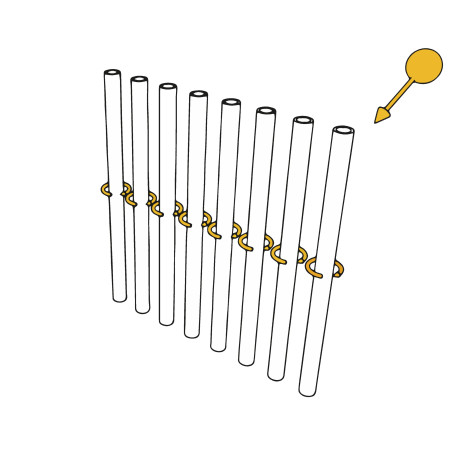 When the number of tubes is increased the single point of light becomes a radial line or ring perpendicular to the length of each and every tube. So in an array of parallel tubes, one light becomes multiple virtual lights. 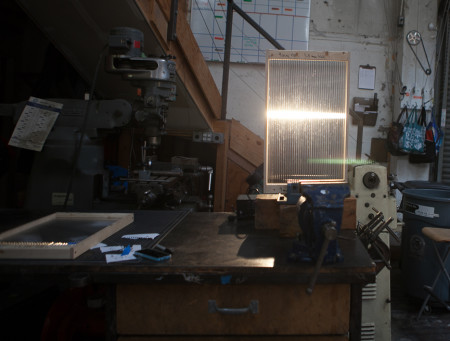 A single light source on a single plane of glass tubes. 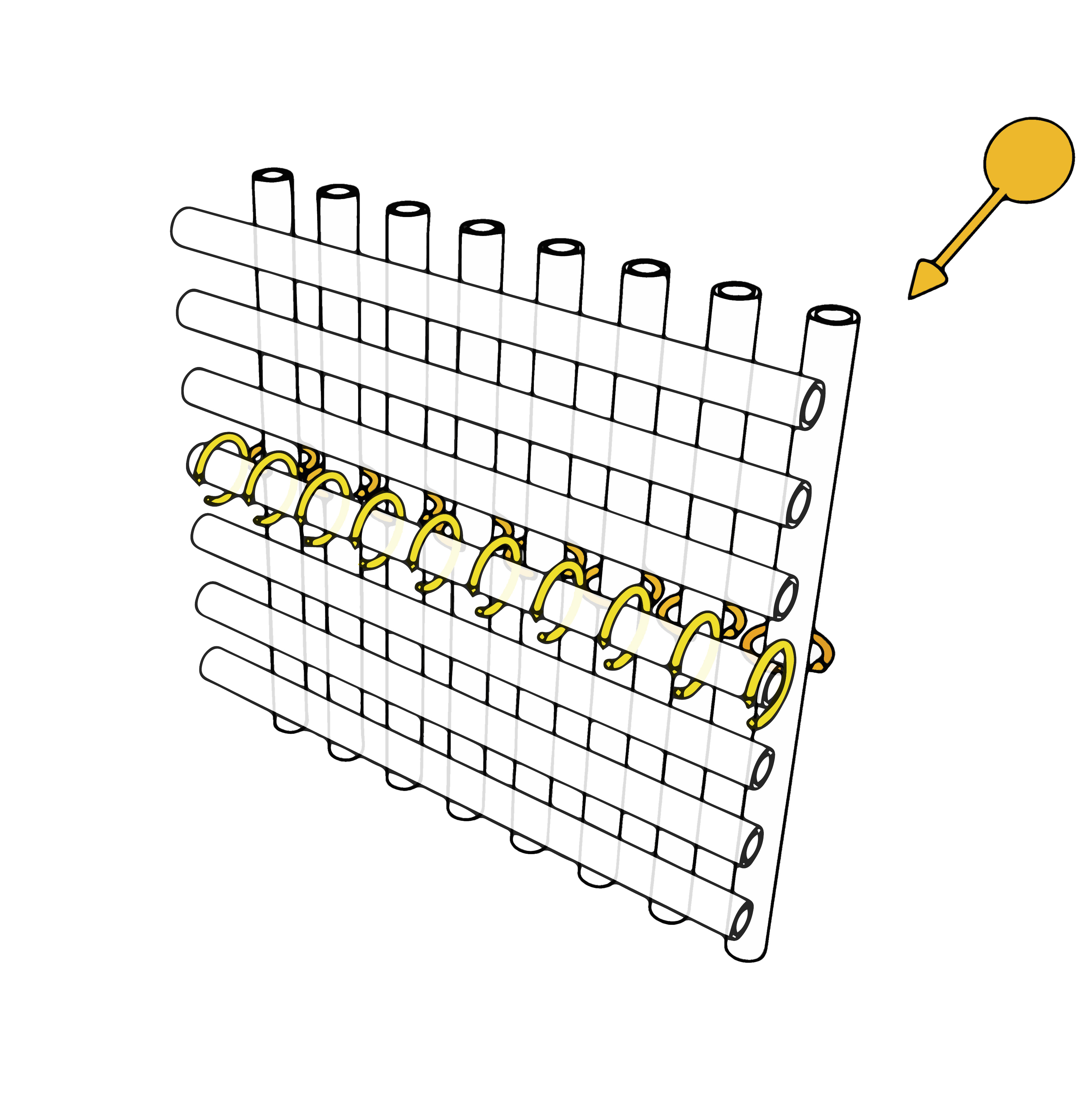 If a second array of parallel tubes is then placed in front of, and perpendicular to the first, each instance of a virtual secondary light is produced along the length of the additional tubes (at a spacing equal to the diameter of each tube). 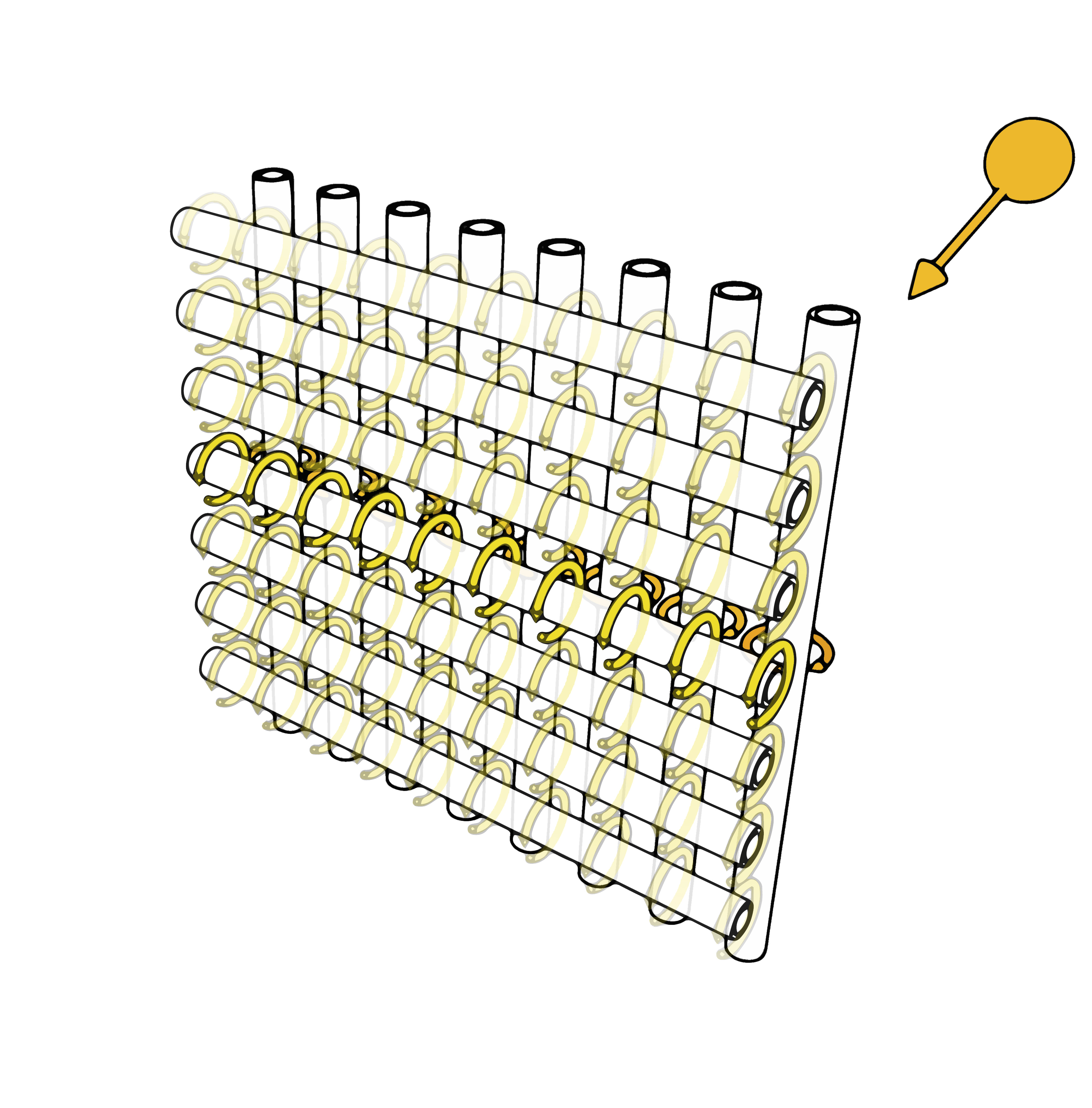 This produces multiple virtual lights and, as in a house of mirrors, it is nearly impossible to identify the original point source. The objectionable light is now lost in a uniform sea of twinkling lights and we have effectively reproduced the medieval conceit of the crystal chandelier, whereby precious candles were multiplied in the various facets of each crystal. 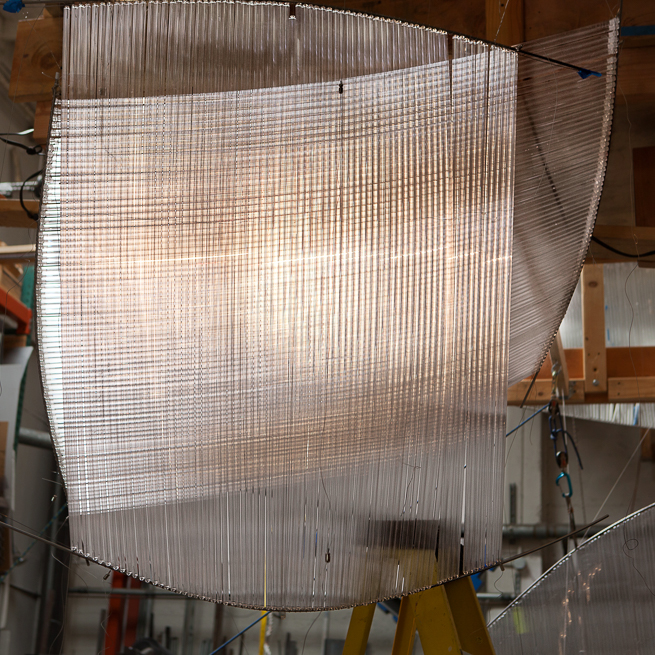 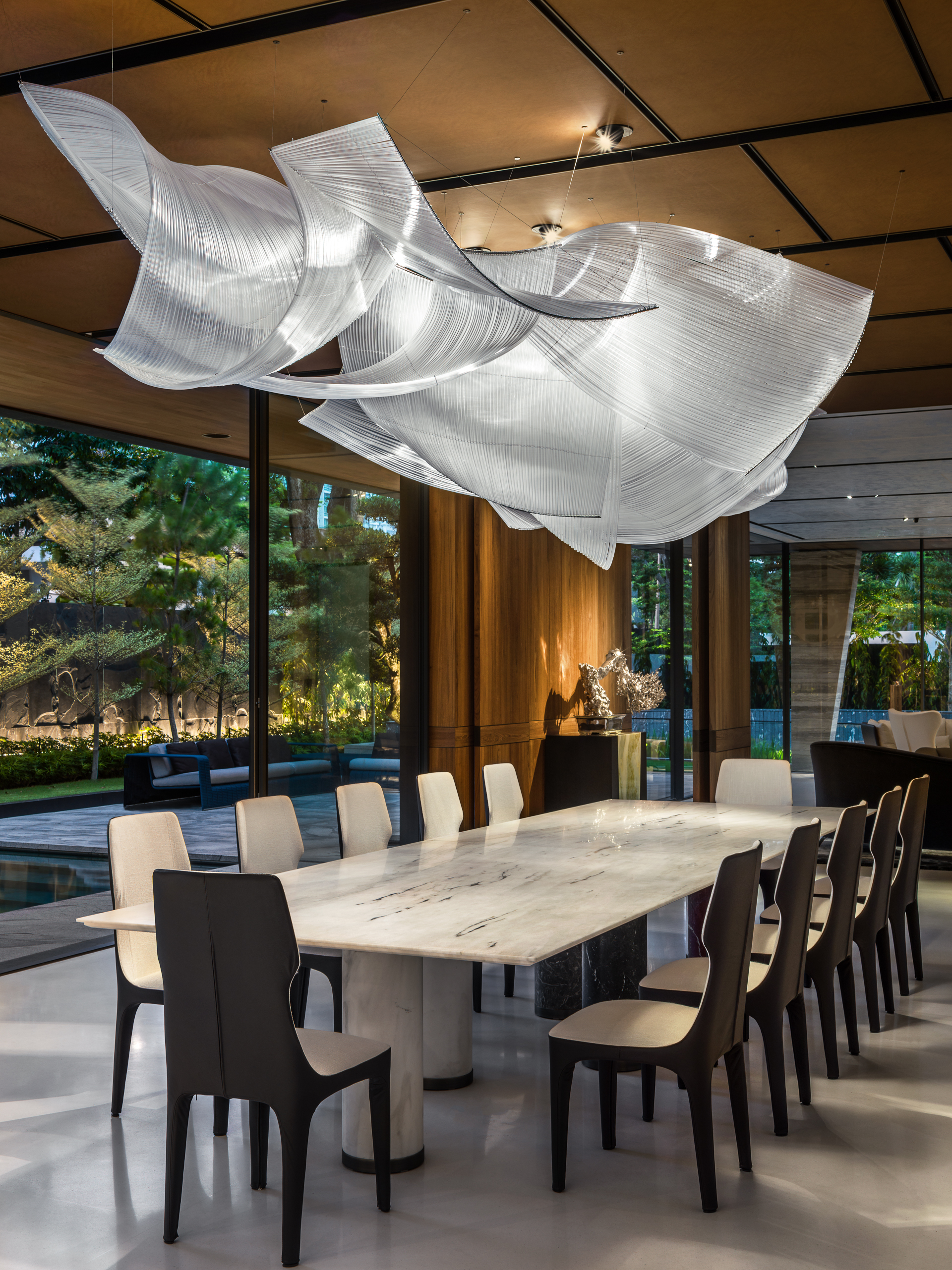 The finished sculpture at a private residence in Singapore. Photo credit: Michael Weber 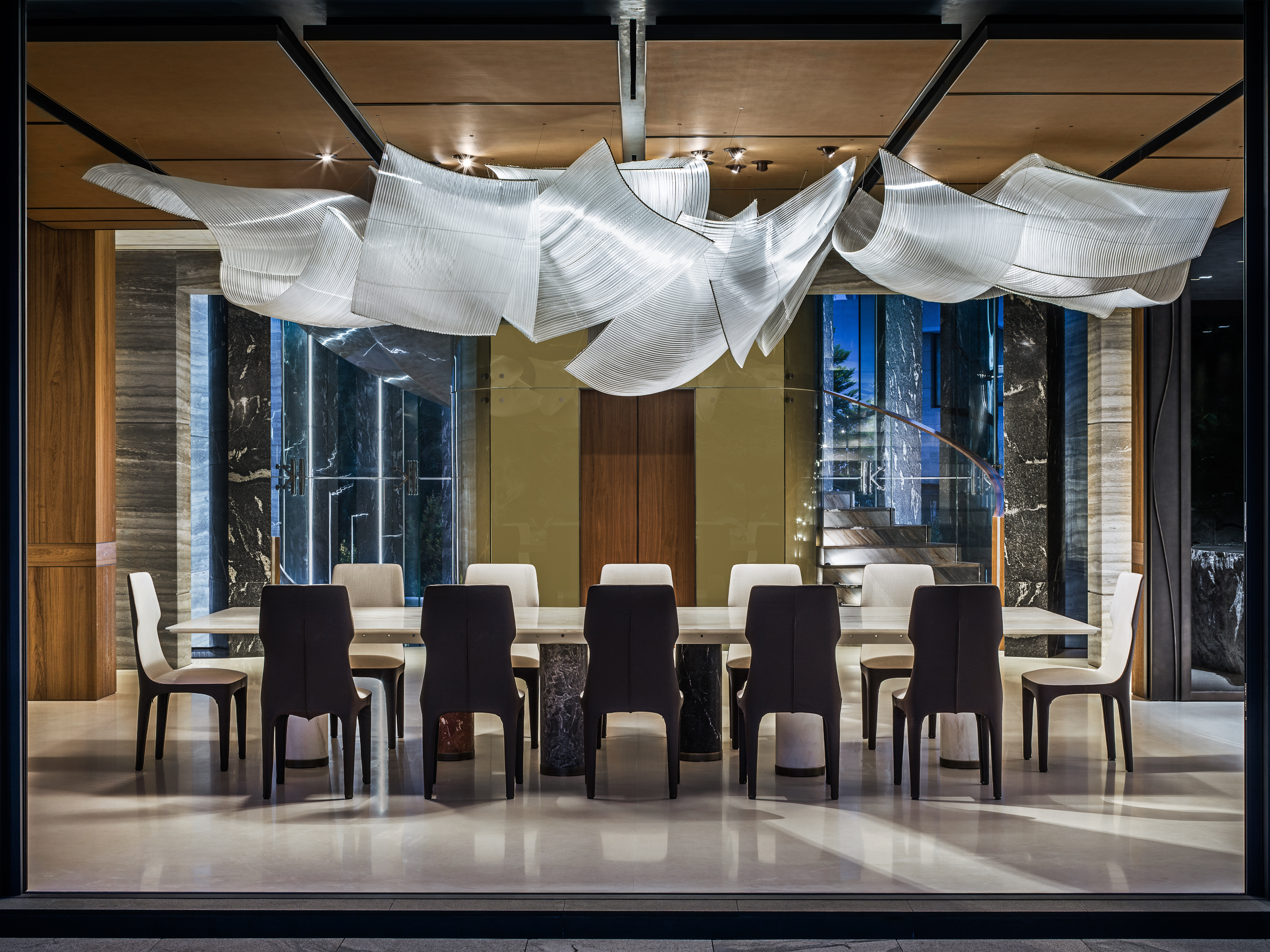 The finished sculpture at a private residence in Singapore. Photo credit: Michael Weber
Bookmark/Search this post with