Shortly before quitting time on Monday, the Under Secretary of Commerce for International Trade from the United States Commerce Department dropped by to present us with an award for export achievement. Francisco Sanchez arrived with a gaggle of local staff. After a quick photo op, he gratefully removed his tie and we showed him around. Emily's sister who was visiting for the week baked a squadron of most excellent cupcakes and I donned a clean white shirt. Clearly, the cupcakes account for his kind remarks about our studio as a nexus of innovation, "The Bay Area is on the forefront of American innovation. Nikolas Weinstein Studios is the perfect example of a small business using exports as a way to support good-paying jobs in America." Hot diggity dog! 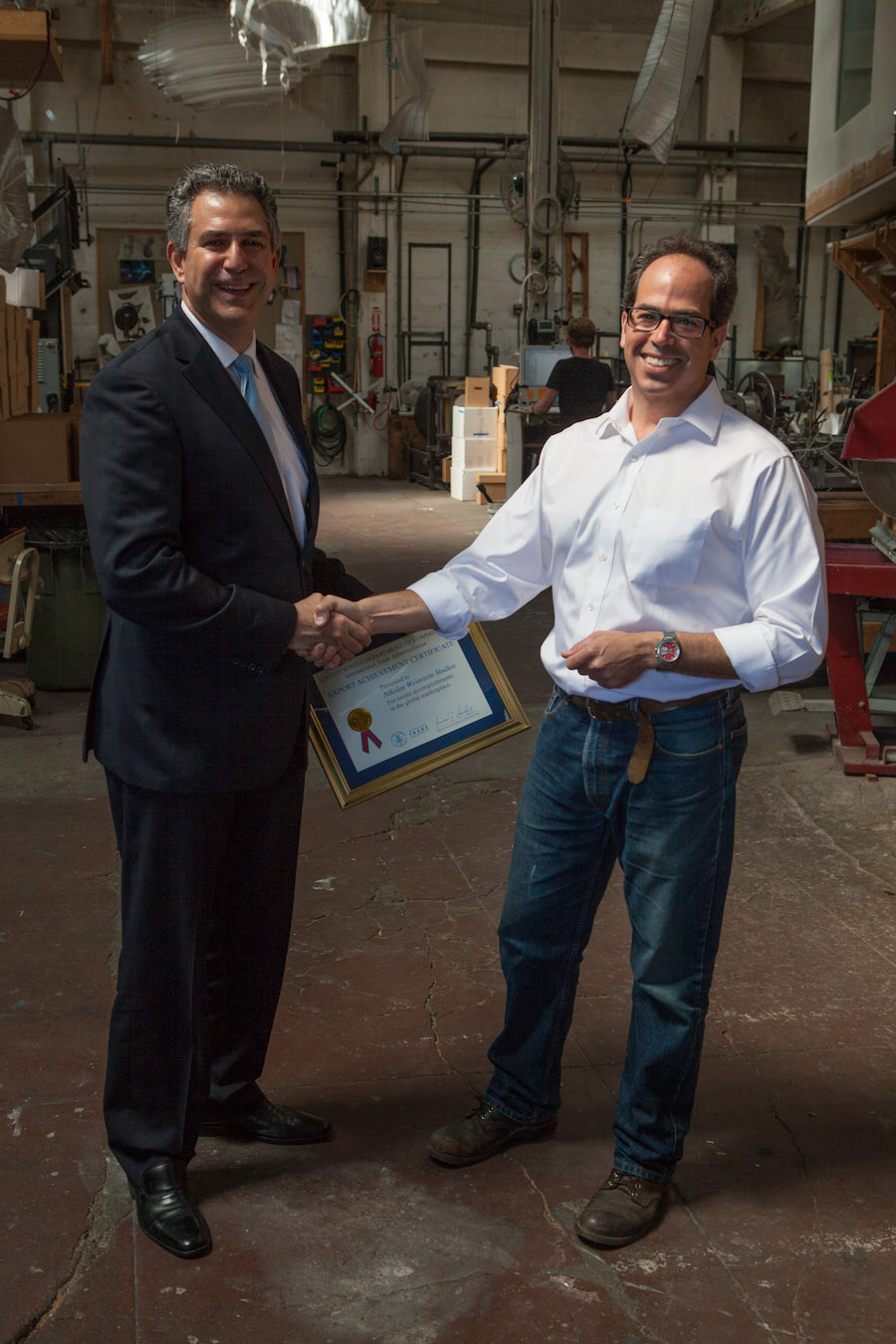 Under Secretary Francisco Sanchez presents Nikolas Weinstein with an award from Uncle Sam. 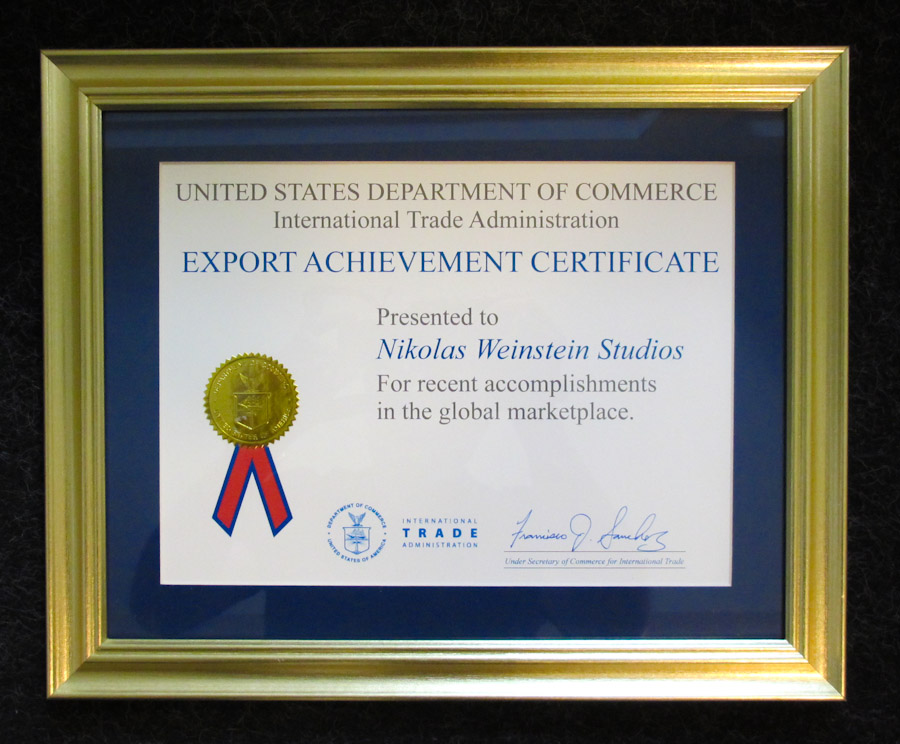 Of course, the events that led to this unlikely meeting were unplanned. This collision of commerce awards and art is confusing and deserves explanation. Tucked away behind a small door at the end of an endless hallway in the basement of some faceless concrete building in Washington, D.C., is an impossibly wonderful branch of our Byzantine government about which we knew nothing until a few years ago. Furthermore, we learned about it in San Francisco when Emily decided to attend an AIASF talk aimed at helping American architects navigate the surfeit of new work in China. We had just completed our project in Shanghai but she figured we had not gleaned all there was to know. The speaker was Stephan Crawford, Director of the US Commercial Service in San Francisco. After the event, they got to chatting. She found him to be refreshingly poised and intelligent despite the predominant associations most of us have with governmental functionaries (think DMV) and he was likely intrigued by our apparent professionalism notwithstanding our madcap venture (art as business? Hah!).

So Stephan came by the studio the following week and we have been working with him ever since. Unbeknownst to us and likely many of you, the government has a department charged with helping American companies develop work overseas. Unlike larger outfits that maintain internal departments for this purpose alone, small companies like ours are at a tremendous disadvantage. Of course, we don't really have any competition to speak of since large glass sculptures that speak to architectural space is not a cutthroat market. In fact, nobody really knows that it even exists! My trips are largely educational; I travel to encourage people to imagine the possibility of this artwork. And trying to find those people in Tokyo and Oslo is daunting even if one speaks Japanese and Norwegian. And that is the Commerce Department's forte: acting as a cultural liaison to identify and arrange meetings with potential clients in unfamiliar places. I often left meetings in Tokyo convinced that nobody was enthused only to be counseled by my Japanese fixer that people were terribly impressed. Cultural divides can be chasms.

And that's why the Commerce Department has someone in each embassy who, in turn, has someone who learns the players in the local health care or construction market. And these people confound and surpass expectations. The higher-ups are often well-educated ex-commanders looking for exotic professional sojourns to pass their golden years.  And their charges are deceptively eccentric and usually delighted to be tasked with helping someone like me. Usually they get stuck with a rep for stents. By comparison, I am misconstrued as a glamorous celebrity creative whose meetings are in developers' penthouse offices with views across the city.

With Emily doing work from the home front and the Commerce Department marshaling assistance overseas, more than 90% of our work is derived from exported art. And that brings us back to that award and the strange confluence of art and government. I cannot speak highly enough about this obscure little office at the end of that endless hallway. And no matter how much I encourage journalist friends to write something about this strange opportunity, it still is a tough sell. Even to the government itself. Every agent that I meet, in places as far-flung as Oslo and Delhi, laments that budgets keep shrinking.

For those who know me, I have few bones in my body that are political and I am nearly certain that the following argument will paint me naive. But this is all happening at a time when President Obama proclaims a National Export Initiative, which aims to double U.S. exports by the end of 2014. While our client demographic is inarguably focused on the very well-heeled that can afford complex art installations, our work nonetheless brings foreign money into the American economy and helps to employ the additional hands that are hired to produce these new projects.  This branch of the US Commerce Department has really helped our business grow and the people with whom I have worked are smart and capable. So, hats off, Uncle Sam. Thank you. 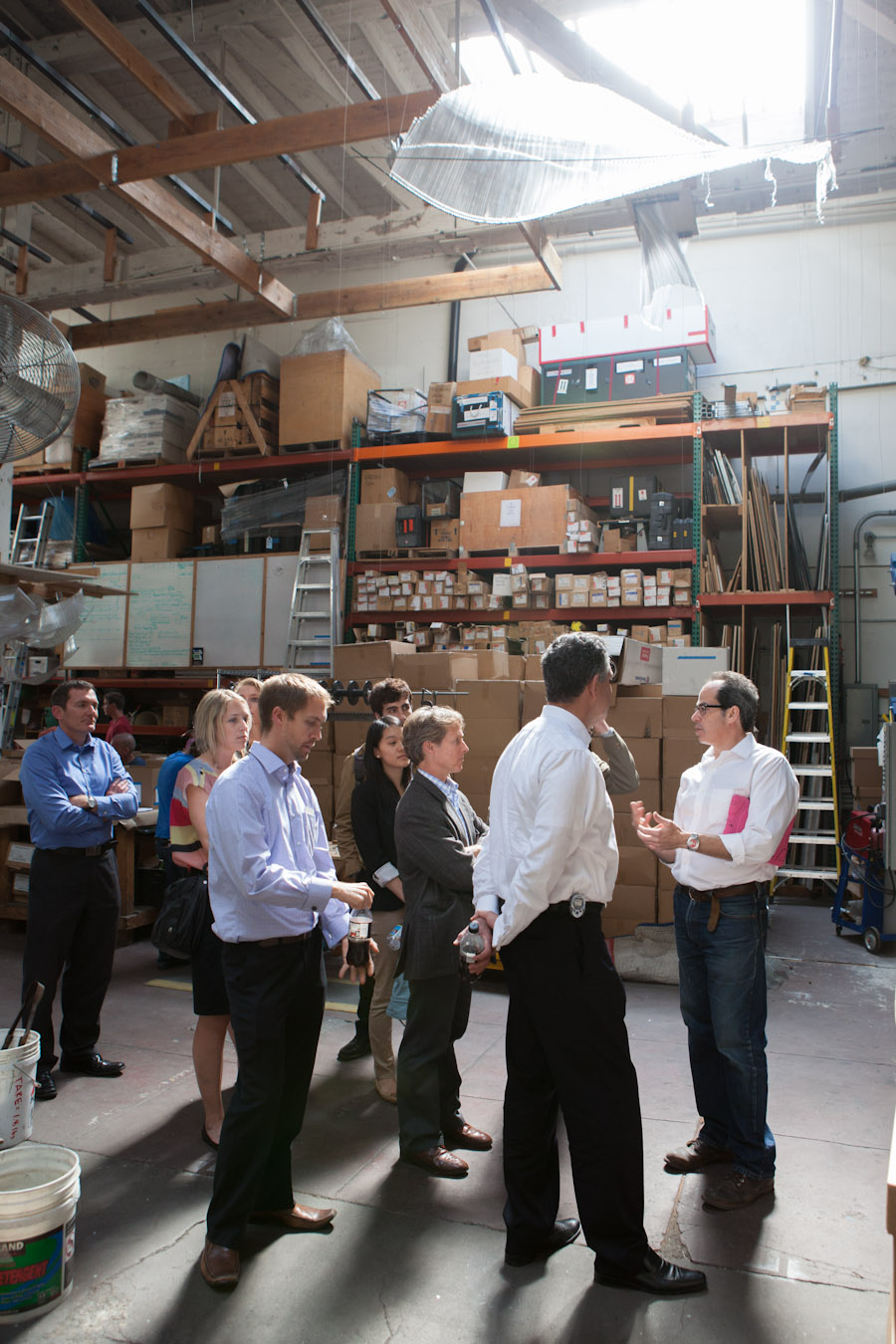 Nikolas shows the Under Secretary and his retinue where the sausage gets made.
Bookmark/Search this post with