Nobody really knows where Mike came from. Some say Boston. Others persist in some story about a hamlet lost in the Vermont hills. This has become a mysterious element in the shop lore - or at least, my shop lore. And so it is with great satisfaction that I am pleased to fit another key piece into the puzzle that is Mike. 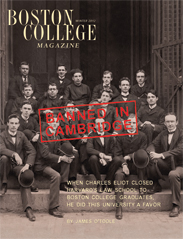 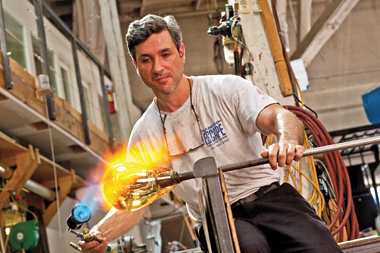 While sleuthing the cyber world, we happened upon a recent article in Boston College's monthly magazine about this man of mystery. Apparently, he at least spent four years as a student at Boston College before jettisoning his hard-won training to become an apprentice glassblower at Simon Pierce in Vermont. Eventually, he threaded his way across country and found his way to our front door. Destiny!

Thank God. He has been with us ever since which some say is five years while others protest that it numbers more than seven. Working his way up through the inscrutable and serpentine hierarchy that is the studio, he is now the head gaffer (that is what the leader of a glassblowing team is called) and runs the shop. As I type this little post, our valiant leader is flying from New Dehli, where he did a site visit for a project that is to be installed imminently, to Hong Kong where he is checking up on a sculpture that we just completed for a new Frank Gehry building, and then scooting just inside the borders of mainland China to get up to speed on a new residential project. And he drinks his martinis shaken, not stirred.

My favorite line in the article captures what draws most of us to work with glass, "It was hot, it had danger. It was perfect for a seven-year-old." And there you have it. We are a happy band of preschoolers.