After many months of prep and head-banging, we are ready to stop fabricating test panels to destroy in the name of engineering and start building our installation for Bar Agricole, a new swanky restaurant in San Francisco. We just received a custom draw of extra long borosilicate tubing from one of the last - if not the last - factory in the country. This kind of tubing is typically pulled from a draw furnace several stories up in the air where it passes through a die in the furnace floor that gives it a basic sectional shape. As it falls, the glass begins to cool and curve into a horizontal position and ultimately ends up on a conveyor bed where it is cut into sections. Our tubes are nearly seven feet long and were at the outside limit of what they were willing to produce as the tubing becomes very fragile at this long length and minimal diameter of about .75". And now that we finally received the tubing after the delays of the recent snow storms back East, we of course have decided that it needs to be two inches shorter for a variety of logistical and fabrication reasons. Ergo the tubilator 2.1. 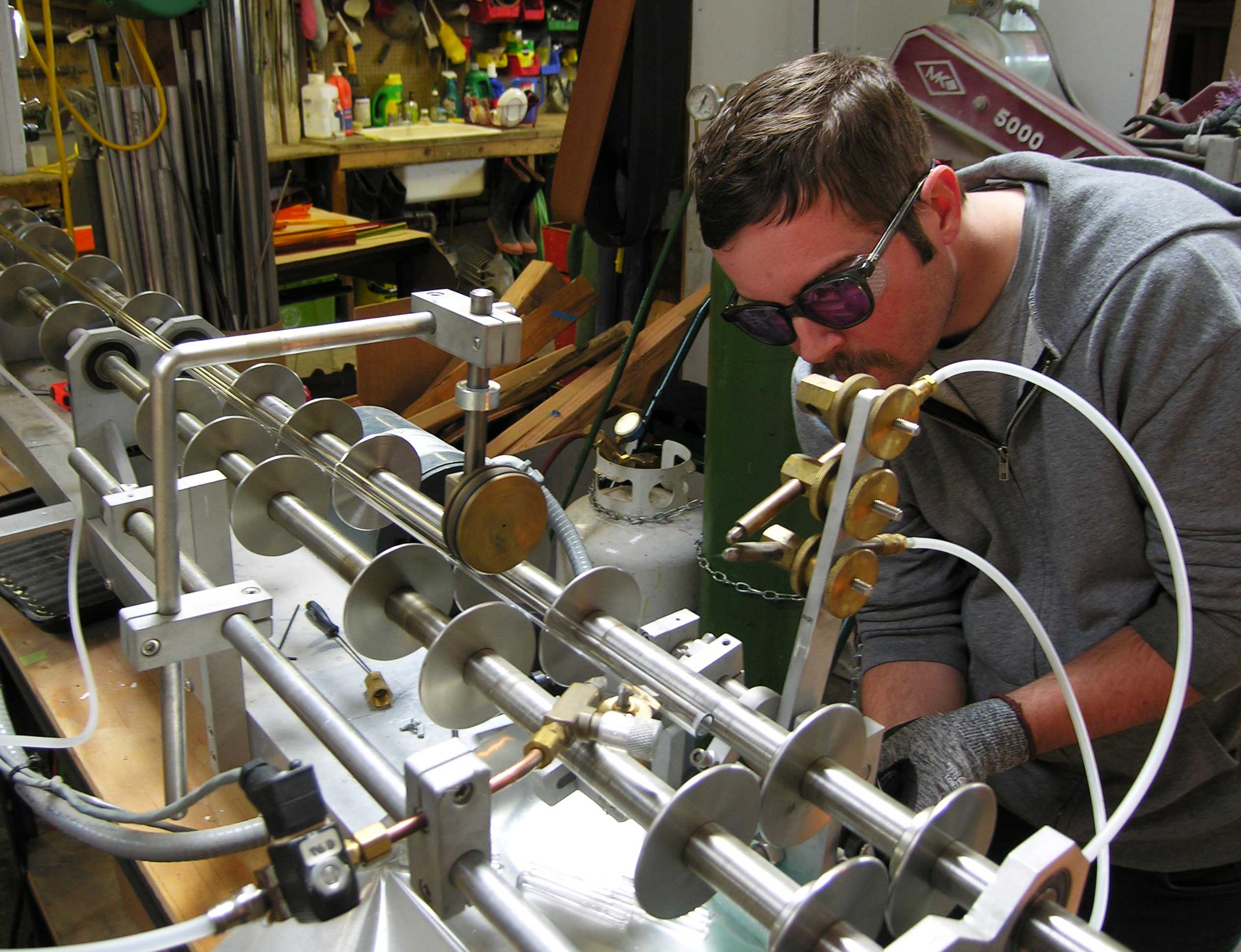 Here is Josh cutting borosilicate tubing with this most excellent machine

We decided to pull this machine out of storage because, while a tad finicky to dial in all the settings, it functions with appreciable finesse once you get into the groove of cutting hundreds of tubes. We had it built for us several years back when we needed to cut thousands of tiny tubular sections for a sculpture we were doing in Singapore. The machine has a series of opposing wheels that spin the tubing while the operator (Mike or his wingman, Josh) pulls a lever that presses a tiny spring-loaded scribe onto the surface of the glass, making the barest scratch. One then cocks another lever that brings a super hot hydrogen/oxygen flame onto that same scribe line. This flame is wicked precise, insanely hot, and stealth. You can't see it until you've seared half your finger off! And then there's a programmable delay after which a little spurt of water hits the same scribe line, stressing the glass where it was heated and ultimately breaking where it is weakest/imperfect - that spot where the first scratch was made. If you keep things dialed in well, you can get incredibly clean and consistent cuts. All of the above takes about twenty seconds.